The History of the Powelton Club

Before the "Roaring '20s" there were the "Gay '90s."  It was a big decade for sports, games and social clubs, For more than a dozen years around the turn of the century, the Powelton Club offered it all. It began as a men’s club, but then introduced regular ladies nights.  It offered whist, billiards, bowling, and more. Its tournaments, socials, and ladies' nights were regularly noted in the society column.  Every year the Philadelphia Inquirer reported on the election of new officers and board members. For most of its history, the club was house at the old Butcher estate [207 N. 35th St. gives links to pictures of the mansion in the early 1880s.], one of the oldest houses in Powelton. The following is a basic history of the Club as offered by the Inquirer.

December 3, 1893, Pg. 14
“The new club has been inaugurated in West Philadelphia.
“The property 3314 Race st. has been rented and the building is being fitted up as temporary quarters. The members now number about 100. A peculiarity of this club and one that every member takes a personal pride in is the fact that no liquors of any kind will be sold, given away or allowed on the premises. Another rule in the by-laws states of the club will be entirely free from gambling, and even card playing for simple amusement will not be permitted on Sundays. It has been given the name of the Powelton Club, and the membership will be limited to 150. The temporary officers are Charles Gilpin, Jr., president, a son of ex-Mayor Gilpin: Samuel C. Woolman [3312 Race], vice-president; William Barratt, secretary, and Howard Watkin [3305 Baring], treasurer. Among those instrumental in the formation of the organization were E. L. Rogers [3411 Race], Max Riebenack [227 N. 34th], A. P. Flint [3214 Baring], L. G. Fouse [3613 Baring], and the temporary officers. The club will be managed on a plan similar to that of the Hamilton Club. The total expense to each member will be $10 entrance fee and $10 annual dues.”

November 15, 1894
“THE POWELTON CLUB
“ITS NEW HOME WILL BE FORMALLY OPENED TO-NIGHT
“Success of the Social Organization Which Carries on Its Rolls Many of West Philadelphia's Best Citizens
“The new building of the Powelton Club, at Thirty-Fifth and Powelton avenue, one of the finest and handsomest buildings of its kind in West Philadelphia, will be formally opened to-night. A public reception, to which a large number of West Philadelphia's and the city's prominent residents have been invited, will be held.
"The club house stands in a commanding position, facing Powelton avenue and Thirty-fifth street and surrounded by a handsome avenue of trees.
“The building is 50 feet front by 100 feet deep, and stands on a plot 89 x 212 feet. It has been entirely renovated and rearranged, so as to insure all the conveniences and comforts of club life. The wide hallway is one of the striking points of the interior arrangements that give the building a quaint and yet pleasant effect. On either side of the hallway are the reception room and library, with accommodation for those who may want to either read or write. In the basement is a fine gymnasium, with all the modern appliances, together with shuffleboard, billiard and pool room and bowling alleys. Close beside these are the bath rooms, lavatories, etc.
“The second floor rooms are devoted to whist parlors, elegantly furnished. The third story is devoted entirely to apartments of the steward and store rooms. All the rooms have the old style of grate. The lighting throughout is by electricity and the building is heated by steam. The outside grounds will be used in summer for tennis and other sports.
“The Powelton Club was organized on November 18, 1893. With a small membership, which has increased from time to time until to-day there are 220 on the rolls. The officers are John F. Craig, president; Samuel C. Woolman, vice-president; Henry Z. Ziegler, treasurer, and Dr. W. C. Barratt, secretary, with a Governing Committee consisting of J. E. Goodman [3416 Race], Charles Gilpin, Jr., Richard H. Watson [3605 Hamilton], W. J. Peale, George A. Fletcher, Howard Watkin, R. D. Allen, George W. Kendrick, Jr. [3507 Baring] and John A. Wiedersheim.”

December 20, 1901
“Powelton Club’s Smoker
“Mirth, wit and good fellowship reigned supreme at the Powelton Club, Thirty-fifth street below Powelton avenue, last night, when the last smoker of the year was given. And entertainment, consisting of instrumental and vocal numbers, had been arranged by the committee in charge, and that the conclusion they were congratulated for their selection. The committee consisted of James Hogan [3204 Powelton], RH Watson, R. A. Schartz, R. Montgomery, and James Lazarus. During the intermission refreshments were served in the basement of the club house. The Powelton Club’s membership is recruited from the most wealthy circles of West Philadelphia, some of the most prominent businessman of the city being on its roll. The newly elected officers of the club are: Samuel C. Woolman, president; George A. Fletcher, vice president; Dr. W. C. Barrett, secretary, and H. Z. Ziegler, treasurer."

May 12, 1906
Samuel T. Freeman & Co. offered the residence and grounds of the Powelton Club for sale at auction.

June 4, 1907“Valuable Properties Including the Old Powelton Clubhouse Sold Yesterday by Sheriff
"The grounds and buildings of the Powelton Club, perhaps the largest club house in West Philadelphia, were sold yesterday at the monthly sale of real estate by the Sheriff in City Hall. The property consists of two lots on the east side of Thirty-fifth street south of Powelton avenue, the entire lot of ground measuring about 100 x 150 feet. The building is the old Dupont mansion [although they lived across the street at 3500 Powelton], which was one of the famous old mansions of the city in days before the residential district had gone west of the Schuylkill. The building is three stories high and was purchased by the Powelton Club about fifteen years ago and remodeled. The total expenditure being about $40,000. The property was sold yesterday to Charles H. Beecher, of Pottstown, for $13,530. Mr. Beecher has until noon today to post his full deposit. When seen yesterday the purchaser said he would remodel the building and make it his residence."

The Powelton Club was only active for about a dozen years, but its history provides a glimpse of the era when Powelton was at its peak in Philadelphia business and social life.
Posted by Douglas Ewbank at 1:31 PM

Email ThisBlogThis!Share to TwitterShare to FacebookShare to Pinterest
Labels: Clubs 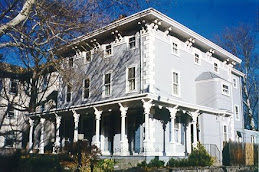